“We had a water slide jumping castle at my daughters 3rd birthday. It was a huge hit! And even better, I didn’t have to set up or pack up!! The slide was recommended for the age group and worked out perfectly! Thanks guys!!”

Our jumping castles are very popular for every type of event. Indoors, Outdoors in a backyard, Public Park or Car Park you can keep the kids entertained for hours on one of our jumping castles! 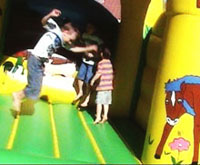 What goes up and never comes down?

What do you always get on your birthday?

Why do we put candles on top of a cake?

It’s too hard to put them on the bottom !

How did the chickens dance at the party ?

Did you hear about Dracula’s Christmas party ?

It was a scream !

Why couldn’t the skeleton go to the Birthday Party ?

He had no body to go with !

What did the peanut say to the elephant?

What do you do with a blue monster?

Try and cheer him up.

What is big, hairy and bounces up and down?

A monster on a pogo stick.

Because there is no atmosphere !

What does a footballer and a magician have in common ?

Both do hat tricks !

Which goal keeper can jump higher than a crossbar ?

All of them, a crossbar can’t jump !

Why couldn’t the butterfly go to the ball ?

It was a moth ball !

Why did you hit your birthday cake with a hammer?

Because you said it was pound cake!

The stamps kept falling off the rocks!

Where do you find a birthday present for a cat?

What is a baby’s motto?

If at first you don’t succeed cry, cry again !

Why are fish so smart?

Because they live in schools.

What is the longest word in the dictionary?

The word smiles – because there is a mile between each s.

What was the average age of a cave man?

Who’s there?
Abby!
Abby who?
Abby Birthday to you!

What do you say to a cow on her birthday?

What do you say to a cat on her birthday?

What do you give a 900 pound gorilla for his birthday?

I don’t know, but you’d better hope he likes it!

For Darwin’s best range of jumping castles think of us...
Darwin Castles.